Once again, Nolimit City, it seems, has been incredibly busy, pushing out slot after slot – with the vast majority of their releases turning into relatively large successes. Their momentum in the online gambling industry has stunned many experts in the last two or three years, and they’ve emerged – from virtually nothing – to become one of the leading game developers in the iGaming industry.

One of their latest releases is called Rock Bottom slot – and while, on the face of it, the game may seem quite depressing, there’s actually some pretty decent gameplay, and things get slightly more lighthearted the longer you play.

The video slot is built around a unique 3-4-4-4-3 layout, and there’s 567 “ways-to-win” active on each spin. Like many of the game developer’s video slots, the game comes in multiple RTP settings. 96.04% is the standard, but this can drop to as low as 87% depending on what setting online casinos choose.

There’s a whopping 19,960x your bet up for grabs, and according to the software provider, the chance of hitting the max win is 1 in 35 million spins. They also state that the slot rates 8/10 on their in-house volatility scale, so expect big up and downswings!

Players can spin the game from as little as 0.20 credits per spin, and the max bet can reach as high as 150 credits; however, it’s up to individual new UK bingo sites and casinos to set the minimum/maximum bet limits, so these may vary greatly depending on where you play.

The purpose of this slot review is to give you a better understanding of what Rock Bottom is all about – and what you can expect when playing yourself. We’ll begin by looking at the theme, design, and layout – and later, we’ll cover the bonuses and features and give you our honest thoughts about everything. 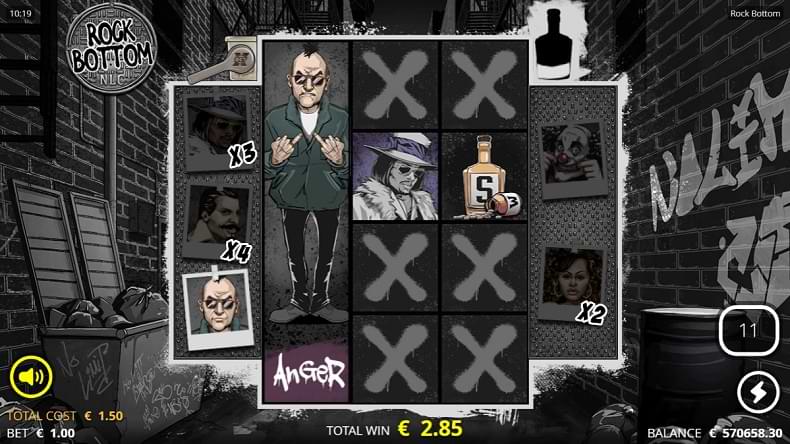 It’s clear that Nolimit City has found their niche; as we’ve seen in releases such as Serial and Mental, they like sinister-looking games with a creepy backstory, and Rock Bottom is no exception. Graphics are, as usual, impeccable, and all the usual in-game options are available including quickspin, autoplay and a replay feature.

The slot uses playing card values, including 10, jack, queen, king, and ace to represent the low-value symbols. These pay between 1.1x and 1.5x your stake for a 5-of-a-kind combo; not the best, but when you consider the “ways-to-win” format, it is possible to hit big wins in the base game, even with the low-value symbols.

The higher-paying symbols are all a bit more relevant to the theme, and they’re all personifications of Anger, Depression, Acceptance, Bargaining, and Denial. These pay between 2.5x and 7.5x your stake for a 5-of-a-kind combo. There are no regular wild symbols in the game, but there are special symbols which can substitute for all paying symbols – and we’ll look at how these work below.

Some familiar mechanics make their way into the game – most notably the xSplit mechanic. These special symbols can only land during the base game on reels two, three, and four, and when they split they become wild. They also split any character symbols that appear on the same row – or on adjacent reels – and they can split the characters up to eight times!

The Headshrinker and Insanity free spins are played on a three-reel grid, and here, only characters, scatter symbols and blank positions can land. Each time you collect five scatter symbols, you will move up to the next level – and there are five levels in total. Each time you reach a new level, a new character is “unlocked” – and he or she then becomes an expanding symbol, nudging up or down whenever it lands in view.

If, during the free spins bonus round, you manage to hit a win exceeding 1,969x your stake, you will trigger a new feature – the xCap bonus. You will then get to pick a random multiplier, of 2x, 3x, 5x, 7x, or 10x; this is then applied against your total win from the bonus round, leading to some insane win potential – albeit unconventional.

If you live in a country where feature buys are still allowed, you will also be able to purchase direct entry to the bonuses. The Headshrinker bonus costs 75x your stake, while the Insanity feature costs 500x.

Rock Bottom slot has some hallmarks of a good game – but there’s also some downsides, we feel. Of course, we love the fact that players can win almost 20,000x their stake – but we don’t love the new xCap feature. Many players have been taken by surprise when this triggers – and they don’t understand how they’ve won so much. Of course, this is never a bad thing – but it’s a bit lame to stick a basic multiplier win onto the end of the bonus round, and this is a rare lack of creativity from Nolimit, in our opinion.

We also find the base game to be quite dull; big wins are pretty rare, and you’ll almost always need to trigger one of the two bonuses and features in order to unlock any decent win potential.

With that being said, the game offers entertainment – but this may be more of a “bonus buy slot” rather than one you grind out for the base game; keep that in mind!

If you want to play another game from the same provider, Pearl Harbor slot is top notch, while Tombstone RIP will have you pleading for mercy.