Nolimit City has been incredibly busy in recent years, pushing out release after release – and, for the most part, enjoying phenomenal success. Known for their super high-variance games, the software providers’ games can now be played at almost all UK online casinos, and their popularity continues to grow. One of their latest releases is the Little Bighorn slot – and despite its young age, it’s already proving very popular with players.

The game is built around quite a unique format; there’s five reels, and the number of rows varies – it’s built around a 3-4-5-3-2 layout. There are 360 paylines in play at all times. Unfortunately, the game has been released in a number of different RTP settings – something we’re generally against. The RTP settings are, at the time of writing: 92.11%, 94.09%, and 96.06%.

Big win potential has become synonymous with Nolimit City’s games, and Little Bighorn is no exception. There is a maximum win of 25,676x your total bet (which is lower than The Border slot) – although we should point out that the probability of winning this much is one in 19 million rounds!

The game is also highly-volatile – coming in at 5/5 on the game developer’s in-house variance scale – and the game can be played from as little as 0.20 credits per spin. The maximum bet, where applicable, can be worth as much as 100 credits – although it’s up to individual casinos and bingo sites to set the max bet.

In this slot review we’re going to be doing a “deep dive” into what the game is all about. We’ll show you what you can expect when playing the game for yourself – and we’ll give you our honest, impartial thoughts about everything. Firstly, let’s take a look at the theme, design, and layout. 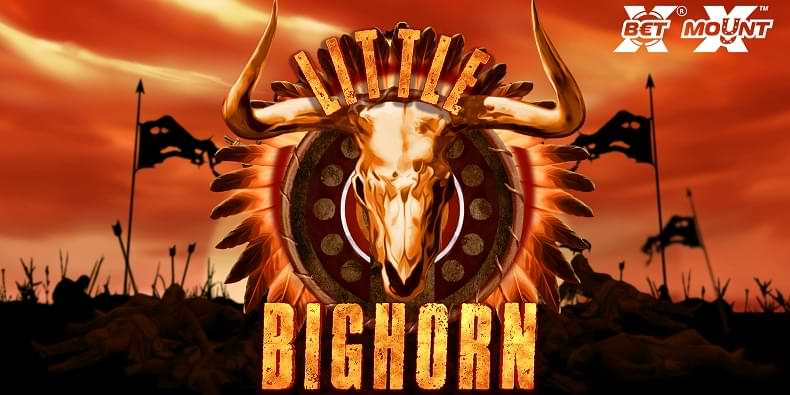 Nolimit City are clearly fans of the Wild West; many of their games take place in the late nineteenth century and, as is common in their games, buffaloes can be seen roaming in the distance, behind the reels. According to the game developer, the slot is set in Montana – and you’ll just be able to catch a glimpse of a tumbleweed-ridden ghost town in the background.

Unfortunately, other than that, the graphics are somewhat basic; desert plains take up most of the non-reel space, and we think most players will be drawn to the strange layout of the reels; it’s almost unheard of to see a 3-4-5-3-2 layout, and it’s something only Nolimit City is capable of.

The game uses five weapons to represent the lower-value symbols – and the higher-paying symbols include a Sitting Bull, a Crazy Horse, and Two Moons. If you form a 5-of-a-kind combo of the low-value symbols you’ll win between 1 and 1.25 times your stake – not great, admittedly.

If you form a 5-of-a-kind combo of one of the higher-paying symbols you’ll be awarded between 1.5 and 3.75 times your total stake. While it may not sound like you’re going to be walking away with big wins, don’t underestimate what this video slot is capable of; big wins are more than possible, and in the following section of this review – “bonuses and features” – we’re going to look at where the game’s real win potential lies.

A hallmark of virtually any Nolimit City slot is the bonuses and features – and Little Bighorn doesn’t disappoint. There’s tons of bonuses and features, and the first is known as the xMount – Scalp Wild. Scalp wild symbols can land only on the 5-symbol-high reel, and when one of them lands in view, it will nudge to cover the entire reel. For each nudge, a soldier symbol becomes “scalped” – and a +1 multiplier is added to the wild.

Next up is the Totem Wild feature, triggered by landing the scatter symbols on reels two, three, and four. During the free spins bonus round, any totem scatter symbols that land in view become an expanding wild – and +1 free spin is awarded.

The Scalp free spins bonus round is the main highlight of the game – the super bonus, if you like – and this is triggered by landing three of the Totem scatter symbols anywhere in view. You will then be awarded 8 Scalp free spins, and during this bonus round, the win multiplier is persistent. Like with many of the game developer’s video slots, there’s also a bonus buy option. This allows you to purchase direct entry to the bonus round for a cost of between 77x and 490x your bet.

It seems that every time Nolimit City releases a new slot, we say the same; “it’s their best release yet”! While not all players might agree, there’s no denying that Little Bighorn slot is a game well-worth checking out – and there’s very little we dislike about the game. While the design and layout are a little unusual – once you get used to it, it’s actually quite fun to be playing something so different.

Even though there’s three RTP settings available, even the lowest is 92.11% which isn’t half bad – and with win potential of up to 25,676x your stake, there’s no denying that we’ll be seeing some monster wins in the game! The bonuses and features are exciting, and we like that the software provider has introduced some new features – things we haven’t seen before, like the xMount. On the whole, it’s a good effort from Nolimit City – and we look forward to trying the game out ourselves!

If you want to reach huge wins of up to 100,000x your total bet then we highly recommend Money Train 3 slot, or alternatively you can try Undead Fortune slot from Hacksaw Gaming, which might start slowly but it hits you like a sledgehammer.