It seems as though Nolimit City are on an absolute mission to take over the iGaming industry – and release after release, they’ve managed to prove that they know exactly what players want to be seeing from an online video slot. Their games are famed for their high volatility, their big win potential – and their exciting (if not confusing) bonuses and features – and they continue to be one of the leading figureheads in the online gambling industry.

Walk of Shame is one of their latest releases, and you’ll be joining Mr.E and his gang of unusual guests as you enjoy a wild party night. The game takes place on a 3-4-4-4-4 format, and there’s a total of 768 “ways-to-win”. However, the number of “ways-to-win” can increase thanks to the xSplit mechanic – details of which we’ll cover later on within this review.

The slot is playable from as little as 0.20 credits per spin, and the max bet can reach as high as 100 credits, although many online casinos and some of the best bingo sites will choose to implement a lower cap. The game’s default RTP is 96.05%, although, unfortunately, Nolimit City releases their games in different RTP settings. Other settings include 94.04% and 92.12% which, in our opinion, is far too low.

The game is fully mobile-optimized, allowing you to play from all of your mobile devices – and you don’t need to download or install any software to begin playing. Simply load up the game at your preferred online casino site in your mobile device’s internet browser, and you’ll notice that the game automatically resizes to fit the screen size you’re playing on.

The purpose of this slot review is to give you a comprehensive understanding of the game and what to expect when playing it. We will take a deep dive into the theme, design, and layout of the game, examining how they contribute to the overall experience.

We’ll also explore the bonuses and features offered, including any special symbols or gameplay mechanics that make the game unique. Our goal is to provide a thorough and unbiased assessment of the game, so that you can make an informed decision about whether or not to give it a try. 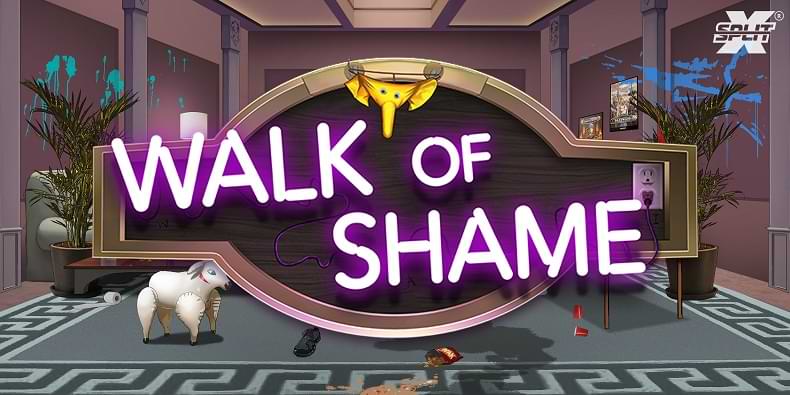 Despite Nolimit City coming out with some stunning graphics in previous releases, we can’t help but feel as though Walk of Shame isn’t the best they’ve done. The reels are set on a backdrop that isn’t entirely clear – and while the symbols are well-designed, there’s nothing overly special going on here.

Thankfully, you won’t find any playing card values, including 10, jack, queen, king, and ace used here; instead, the low-value symbols are represented by empty drinking glasses – in four formats – followed by four different characters. The character symbols are the higher-paying ones, and pay up to 5x your stake for matching a 5-of-a-kind combo.

There’s also a special Mr.E symbol that can only land on the first reel. When he does, he’ll transform into an xSplit symbol – details of which we’ll cover in the bonuses and features section below.

The mechanics and features in Nolimit City’s slots tend to reappear time and time again – and Walk of Shame is no exception. As mentioned earlier, when Mr. E lands on the first reel, he’ll transform into an xSplit symbol, and will then add a multiplier to all of the symbols – either vertically or horizontally. However, unlike in previous Nolimit City releases, he can’t split scatter symbols.

The second modifier is the Loaded Wild. If you manage to land any of the character symbols fully stacked on reels two, three, four, or five, they will expand to cover the whole reel as a 4x wild symbol. If you manage to land two of three of these 4x wilds, you can form some pretty big wins – and this is similar to the 6x multiplier wilds we saw in BTG’s Danger High Voltage.

There’s also an enhanced bonus round, which is triggered by landing three or four scatter symbols during the base game and Mr. E on the first reel. During the enhanced free spins, Mr. E will lock in position, activating the xSplit feature on every spin. This greatly increases the win potential, and makes it far easier to form those monster hits.

As with most of the game developer’s video slots, the game also offers a bonus buy feature to non-UK players. The cost of the standard bonus round is 69x your stake, while the enhanced free spins will set you back 314x.

Nolimit City rarely releases a bad video slot – and Walk of Shame definitely isn’t bad. However, after some of the software provider’s recent releases, we can’t help but feel it’s a bit on the tame side. There’s not a huge amount going on, and while there’s some decent win potential available, it feels as though it would be pretty hard to ever get anywhere close to actually hitting this win potential.

Still, for those looking for something a bit less volatile than what we typically see from Nolimit City, it’s a decent game – and it’s worth checking out, especially as the bonus buy costs are much lower than what we’ve seen recently from the developer!

If you fancy a more entertaining title from the same provider, give Dead Canary slot a try, or as an alternative, Rasputin Megaways slot from BTG is worth some spins.