Fire In The Hole Slot Review

Nolimit City has taken the online gambling world by storm in recent years, rapidly rising to become one of the leading game developers thanks, largely, to their unique game mechanics and highly volatile machines which offer players the chance to win up to 150,000x their stake.

Fire in the Hole is their latest release, and, like all slots they have pushed out in recent years it follows a volatile math model allowing players to win as much as 60,000x their stake. Let us not forget the legendary San Quentin and East Coast vs West Coast games and their huge winning potentials.

Fire in the Hole slot utilises a unique playing format that sees the number of rows – and “ways-to-win” – increasing with wins, and, with an RTP of 96.06%, it offers players a good level of playtime too.

To kick off this Fire in the Hole slot review we are going to take a look at the game’s theme, design – and layout. 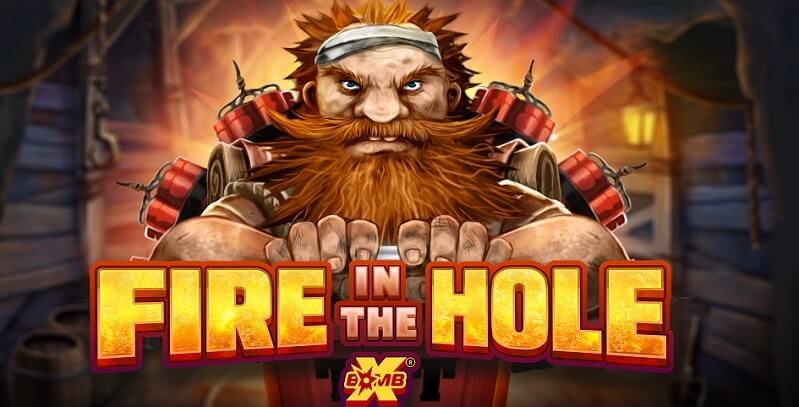 Fire in The Hole Slot: Theme, Design, and Layout

Fire in the Hole is set deep within the narrow corridors of a mine – and while it is by no means a new theme, it is one the software provider pulls off well. The game also sees Nolimit City’s new xBomb mechanic debut – something we will be covering later on in this review.

When you begin playing Fire in the Hole you’ll be playing on a game area with 6 reels and 3 rows. Initially, there are 486-ways-to-win. However, the size of this reel grid can increase, and when all 6 rows are unlocked there is a whopping 46,656-ways-to-win active. We will talk about this in the next part of this review.

Like most of the game’s we have seen the software provider pushing out, Fire in the Hole can be played from as little as 0.20 credits. High-rollers will be pleased to find the max bet is a healthy 50 credits per spin – and, thanks to the HTML5 build, the game is also playable on all devices – including all mobile devices. The game is now available at our top casino sites UK.

Unusually for Nolimit City, they have chosen to use playing card values, including 9, 10, J, Q and K to represent the low-value symbols on the reels. They have also chosen to emit the A from the line-up – another move showing how the game developer is unafraid to be unorthodox.

When it comes to the slot’s higher-paying symbols, you will see Pickaxes, Rope, Boots, a Satchel and a Lantern – with a 6-of-a-kind combo of the latter awarding a payout of up to 7.5 times your stake.

The main wild in Fire in the Hole is the xBomb Wild – and when this lands in view, it substitutes for any other paying symbols in view to help you form a win. When this wild lands, it also explodes, removing adjacent symbols and increasing a win multiplier by 1X. If there is no win and a wild symbol lands, then the xBomb will also explode, giving you an additional chance to form a win.

Fire in The Hole’s Bonus Features

There is a lot going on in Fire in the Hole and the first feature you will notice is the expanding grid layout mechanic. With each spin starting with 3 rows, whenever a win is formed, one additional row is unlocked – and you can unlock a total of 6 rows, at which point the full game grid will be unlocked and there is 46.656-ways-to-win active.

The main attraction of Fire in the Hole, however, is the Lucky Wagon Spins bonus round, and this is triggered by landing three, four or five of the scatter symbols anywhere in view during the base-game. You are then awarded with 3 re-spins, and the size of the game grid these spins are played out on depends on how many scatter symbols you landed within the base-game. Land all five and you will notice the full game grid is open.

It is essentially the same kind of re-spin bonus round we have seen in other popular games like Money Train 2 – and on each re-spin, coins can land in view, awarding a cash value between 1-100x. Landing any symbol resets your total re-spin count back to 3.

There is also a number of special symbols that enhance the potential of the slot. The multiplier applies to all coins below it when it lands, while the dynamite symbol unlocks new row positions and can help to unlock the collect chests at the bottom of the screen – more on that in a moment.

There is also a dwarf symbol which collects all the values on the reels – and continues to repeat this for every remaining re-spin.

If you manage to land 5 scatter symbols initially, or land enough dynamite symbols to unlock the chests at the bottom of the screen, they will then collect the values above them for every remaining spin – so if you can get a few chests unlocked, you can begin seeing where the game’s real win-potential lies.

Like many of the game developer’s slots, Fire in the Hole also offers a bonus buy mechanic. This costs 60x, 157x or 500x your stake depending on how many scatter symbols you want the bonus to begin with.

There is a lot to take in when you play the Fire in the Hole slot game, and while the bonus round can take a bit of getting used to, it is essentially what we have seen so many times before – albeit with much higher win-potential and more reel modifiers.

We love how the game’s capable of producing wins of up to 60,000x your stake – and we are already seeing it proving a major success among players!

If you are looking for more games with great visuals, then we highly recommend The Green Knight slot and the Land of Zenith slot. You will not be disappointed.