The online slot games of Grease I and Grease: Danny & Sandy, manufactured by the gaming provider of Bally Technologies and Daub Games, have become an instant hit with bingo players across some of the most popular websites. If you’ve been keeping tabs on our blog section then you will know that there have been multiple winners ever since these games were introduced  at both Kitty and Lucky Pants Bingo. Now we’ve been informed that over the course of two days, two more jackpots have been hit while playing these two vibrant games.

The first win took place on Tuesday February 11th over at Kitty Bingo, when a player with the initials M.G scooped a jackpot  worth £2,633 while playing the mini version of Grease I. The lucky player was spinning the reels at a cost of 50p at a time, when they randomly activated the progressive jackpot, awarding them the fantastic windfall. 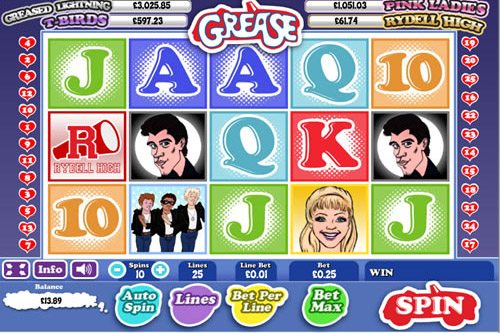 The next day, Wednesday February 12th over at Lucky Pants Bingo, the player that bears the initials G.H managed to collect a total of £2,000 when playing the newest version of this game called Grease: Danny & Sandy. The win occurred when G.H  landed winning combinations at the same time on both lines 6 and 24, which resulted into each line paying out £1,000. The latest edition of this game has new and improved features, including the Dance Bonus Game, the Frosty Palace Bonus Game, the Drive In Free Spins and the Beach Free Spins, all giving players the chance to increase their winnings in a matter of minutes.

Players at both bingo sites now have the chance to experience these Daub Games  and many more from their mobile devices, since both websites have their own mobile apps. They can be accessed from both mobile and tables, as well as Android Smartphones. Existing members can login straight away using their current login information.